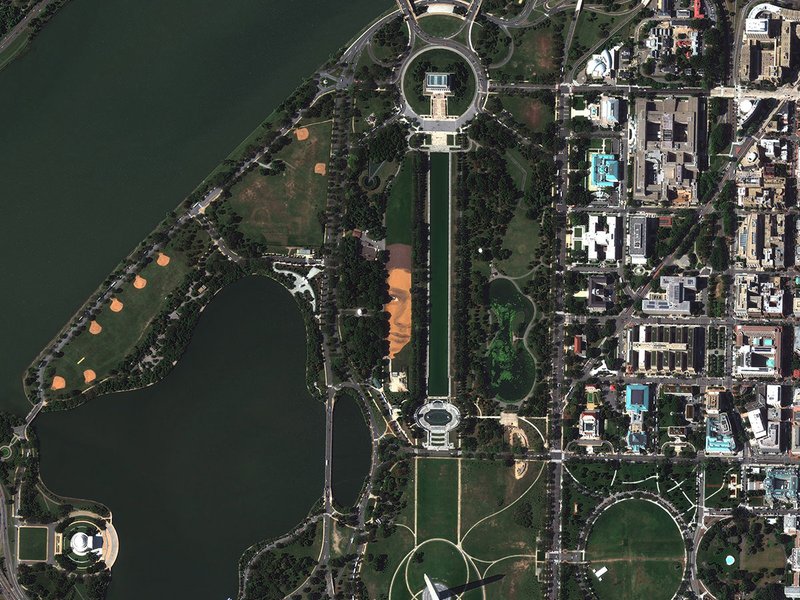 What appears to be a single face, made from soil and sand across five acres, is a composite of 50 men between the ages of 18 and 24.

Earlier this year, one of our favorite museums in the world — the Smithsonian’s National Portrait Gallery — commissioned Jorge Rodríguez-Gerada, a Cuban-American artist, to create a giant earth portrait, a “facescape,” on a 900-foot by 250-foot plot on the Mall.

He photographed the men at random in Washington, D.C. and then selected elements of each face – “the glint of an eye, edge of a mouth, someone’s lip texture” – for an image he created using Photoshop. They he turned that image into a line drawing.

The idea behind “Out of Many, One” came to him because “Diversity is the backbone of the nation, and this piece embraces that fact. I decided to create the face of a young adult male because I want to talk about the reality of this demographic group in the U.S. Nothing affects us more than the arbitrary nature of identity. We are judged immediately by the preconceptions about how we look and where we come from. For minorities, the reality is harsh.”

I wanted to learn more about this fascinating artist and his process. I learned he created facescapes in Belfast, Amsterdam, and Spain. Here’s the one he created in Belfast: 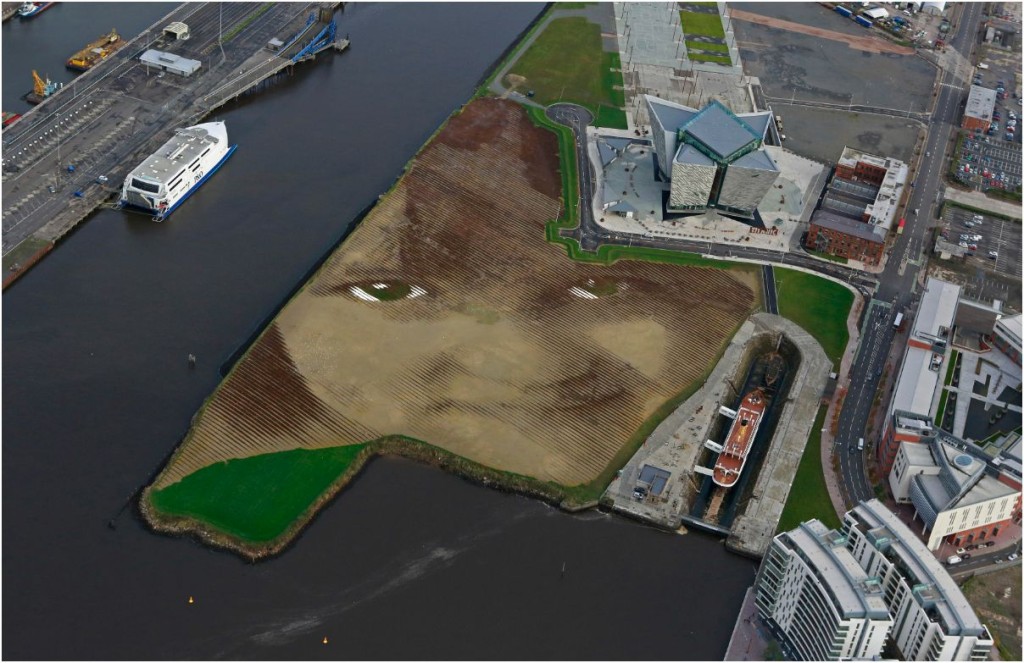 In Barcelona, he draws charcoal portraits on old walls of the people who live in the neighborhood. As temporary as the soil and sand used in his facescapes, the charcoal eventually fades away. 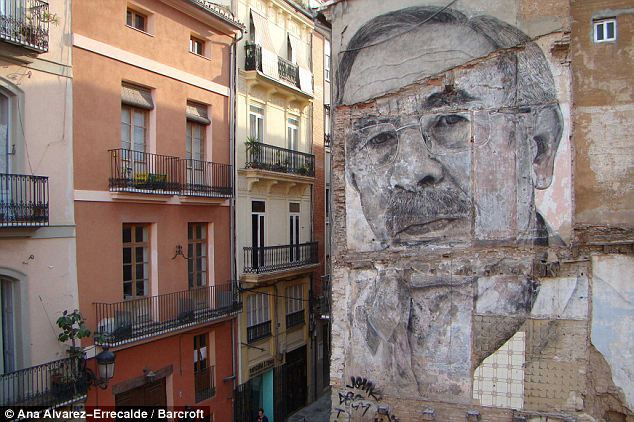 I marvel at how he has found a way to blend photography, drawing, gardening, GPS satellite system experts, and construction workers to collaborate on a portrait that is nothing like any portrait I have seen.

“Out of Many, One” was in place for one short month – October 2014 – on five acres between the Lincoln Memorial and the World War II Memorial. Using 2,300 tons of sand and 800 tons of soil, there is no negative impact on the environment. Using GPS, Rodríguez-Gerada used 15,000 pegs/stakes to indicate facial features. A team installed the stakes in the ground, and the next step was to thread the stakes with string, in order to create a template for the placement of the soil and the sand, forming the light and dark facial features of the portrait. To position the stakes, Rodríguez-Gerada enlisted the help—for free—of Topcon Positioning Systems from Livermore, California. “Topcon technology is my digital paintbrush,” the artist says. “The average GPS used on our phones is relatively inexpensive, but not extremely accurate. Using the GPS satellite systems and its own special components, Topcon does super-precise “GPS+” surveying for agribusiness, private commercial construction companies, cartographers and government agencies.” Essentially, Topcon mapped the portrait on the site.

Watch the fascinating process in this mini documentary made by the National Portrait Gallery:

The satellite image you see of “Out of Many, One” was captured by DigitalGlobe’s GeoEye-1 satellite on Oct. 6, 2014.

Finding Balance in an Unbalanced Age: Get Off the Homework Train 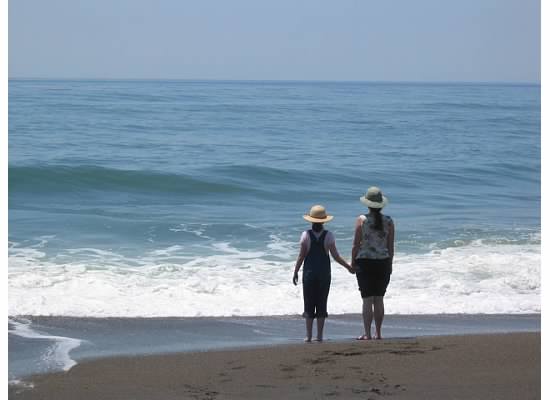 When Things Don’t Work Out As Expected 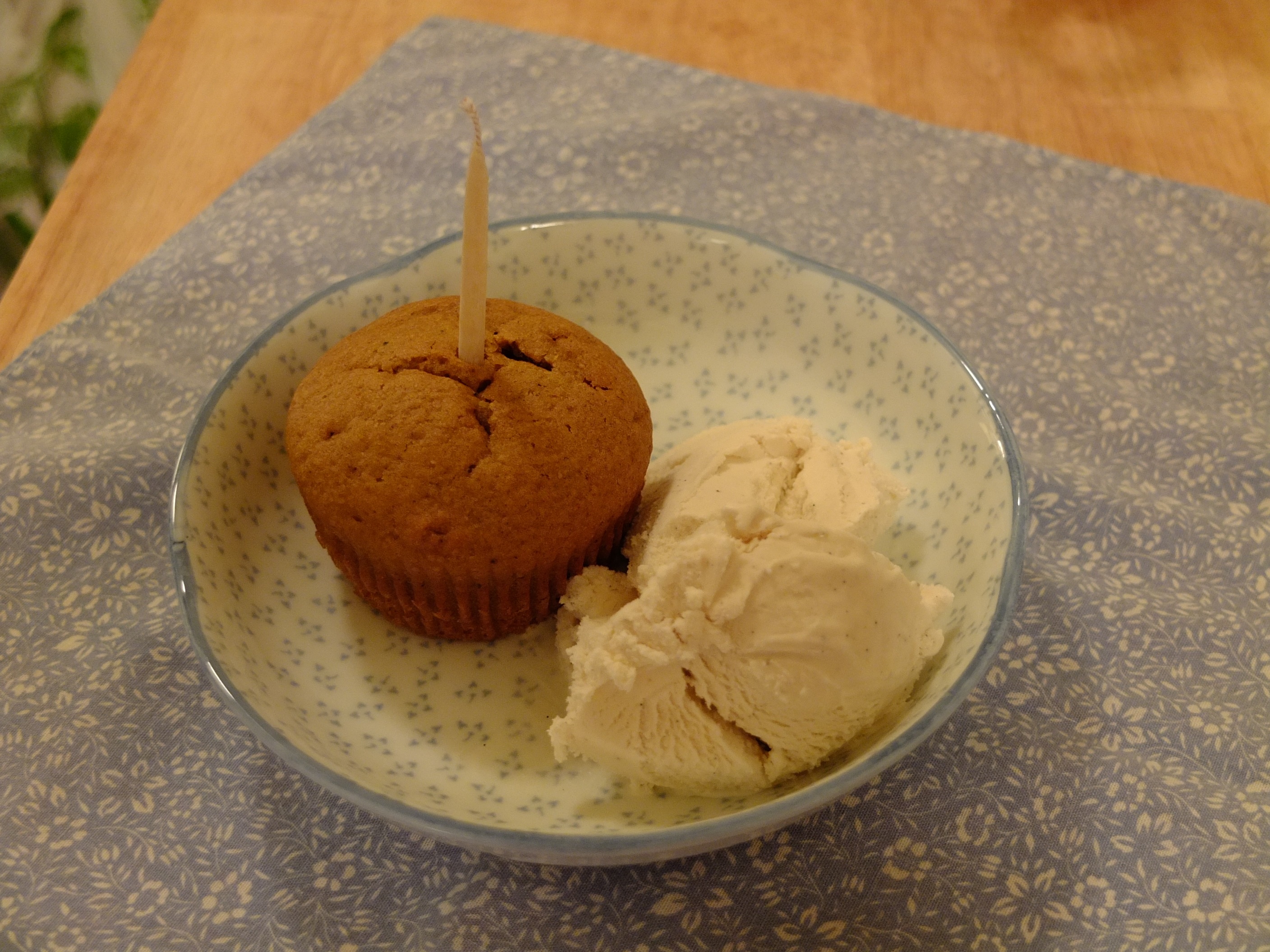 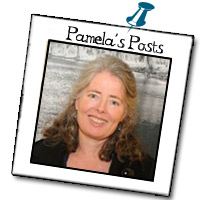